Using the community AMIs I have test agents in each EC2 DC. Recently the Virginia agent started showing the ‘developer mode’ warning in Chrome:

These show up on test results film strip and appear count against speedindex. The odd thing is that this only happens with the Virginia agent. If this was an agent related item I would have expected it to happen with all of them.

I tried clicking through the dialog a few times, and eventually just nuked the EC2 instance and started another one using ami-4a84a220. But it still happens, even on the new instance. 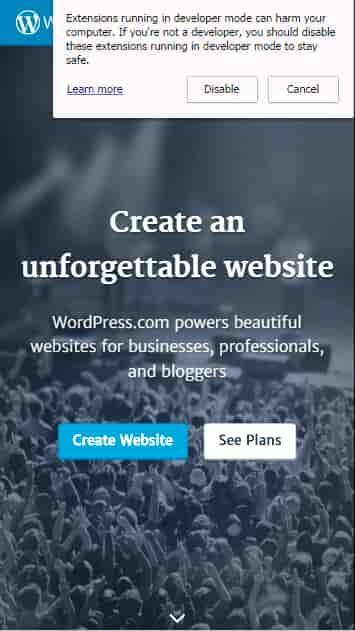 Any ideas on what is going on here?

Update your wptdriver. Chrome 52 started warning about side-loaded extensions and I had to hack around it last week. 290 or later should work cleanly (I just pushed 292 today so may as well grab that one).

If you are running a recent version of the web UI there is also a setting in settings.ini that will automatically grab agent updates any time I push a new version.

I manually updated to 292 today ( grabbed the wptupdate.zip, unzipped into position ) and set agentUpdate=http://cdn.webpagetest.org/. But I’m still getting the developer mode warning. The version of Chrome is “52.0.2743.82 m” with the ami-4a84a220 image.

Very odd that it only happens on this one test agent, all the others are fine.

Is it just that one instance or do you consistently see it with that ami in that region? Has the instance been running for a while (weeks/months)? Just wondering if somehow something got stuck in a bad state and if terminating and re-deploying clears it up.

Looks like the public instance version of the EC2 location hasn’t picked up the Chrome 52 update yet but SpeedCurve has and they were the first ones who pointed it out to me last week and I’m fairly sure it went away for them (and I was developing on that ami when I was working on the fix just to be sure).

Out of the 11 agents ( one is each EC2 DC ), it is only the one in Virginia that is showing the dev mode box. The original EC2 instance had been running for some time ( at least a year ), after fiddling with it for awhile I terminated it and spun up a fresh instance. The new instance has the same dev mode box.

I reviewed test results from all 11 agents in more detail and this is definitely Chrome 52 related. The Virginia agent is the only one running Chrome 52, the other 10 are using Chrome 51. Good to know the cause, although I don’t know why only one of the agents updated to 52.

Argh, ok, thanks. I’ll try a different approach. Instead of fighting with Chrome and hacking around the warning I’ll publish the extension to the web store so it can be installed “officially”. It will stretch out the dev cycles a bit since I’ll need to upload any time there are changes but it’s probably a lot safer that way anyway.

I just uploaded the extension and I’ll take a crack at having the agents pre-install the approved extension in the next day or two so hopefully it will be completely fixed soon.

I still can’t reproduce it with Chrome 52 on the public instance using the same AMI’s. Can you try updating wptdriver to 296 and if it is still an issue can you ping me offline and maybe give me RDP access to the instance to debug locally and see if I can figure out what is going on?

Sorry to ask again Patrick, but can you remind us how do you get the latest agents ?
they are not in the 2.19 release

Sorry for the short reply (on my phone). Hope this helps: https://sites.google.com/a/webpagetest.org/docs/private-instances#TOC-Updating-Test-Agents

Sorry for the short reply (on my phone). Hope this helps: https://sites.google.com/a/webpagetest.org/docs/private-instances#TOC-Updating-Test-Agents